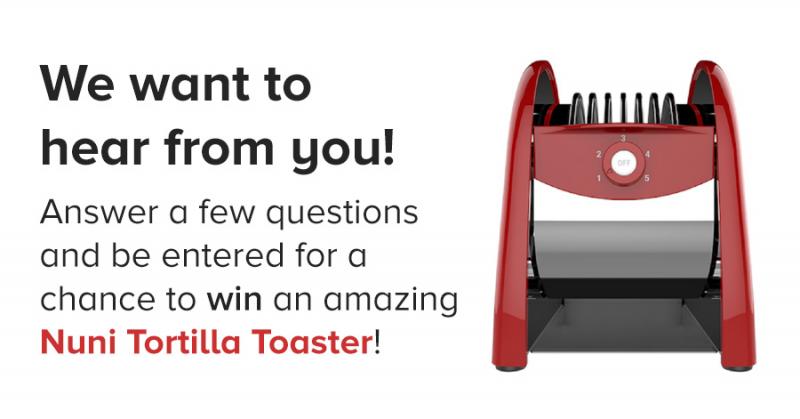 NO PURCHASE NECESSARY TO ENTER OR WIN. PURCHASE WILL NOT INCREASE YOUR CHANCES OF WINNING.  YOU HAVE NOT WON YET.

These Official Rules apply to Latina’s “The Latin Kitchen Survey” (the “sweepstakes”) to be conducted during the Entry Period described below.

ELIGIBILITY:  The Sweepstakes is open to all legal residents of the 50 United States and the District of Columbia who are 18 years of age or older. The Sweepstakes is void in Puerto Rico and U.S. territories and possessions and where prohibited by law. Employees of Sponsor (collectively, the "Promotional Partners") and their respective affiliates; advertising, public relations and promotion agencies; and accounting or legal firms, and members of the immediate family members (parent, spouse, child or sibling and their respective spouses, regardless of where they reside) and those living in the same household of such persons, whether or not they are related to any of the above, are not eligible to participate or win the Prize. By participating, entrants agree to be bound by these Official Rules and the decisions of the Sponsor, which are binding and final on all matters relating to this Sweepstakes. The Sweepstakes is subject to all applicable federal, state and local laws.

Visiting http://thelatinkitchen.com/tlk-survey-sweepstakes and following the on-screen instructions to complete and submit the online entry form. Entries must be received by 12:00 p.m. ET on 03/02/2018 to be eligible. Limit one (1) entry per person and per email address, per day. Multiple entries from any person or email address per day will void all entries. Entries generated by script, macro or other automated means are void. All entries become the property of Sponsor and will not be acknowledged or returned. Entries that are deemed by the judges to be immoral, obscene, profane, lewd, not in keeping with Sponsor's image or in violation of these Official Rules will be disqualified. This Sweepstakes may be cancelled in the event an insufficient number entries that meet the minimum standards established. Except as otherwise stipulated in these Official Rules, and to the extent entrants may otherwise elect at the time of entry, personal information collected in connection with the Sweepstakes will be used in accordance with Sponsor’s privacy policy located at www.latina.com/privacy-policy.

GRANT OF RIGHTS: By submitting an entry, you grant Sponsor and its affiliates and subsidiaries a worldwide, fully paid, royalty-free license to use, publicly perform, display, copy, publish, broadcast, edit, modify, rearrange, create derivative works from and otherwise exploit, in whole or in part, your Submission and any materials based thereon or derived therefrom, in any manner, for any lawful purposes whatsoever, including but not limited to on the internet or for any packaging, advertising or promotional purposes, in any medium (whether now or hereafter known) throughout the world, in perpetuity, without further permission, consideration or payment, unless prohibited by law. This right includes, but is not limited to, use on a promotional or editorial page in a subsequent issue of Latina as part of a promotion, editorial content or advertisement. No further cash compensation, royalties or rights compensation are included as part of the prize. For clarity, Sponsor has the right but is not obligated to use the Submission.

PRIZES/ODDS: The Sponsor will award one prize: A Nuni Tortilla Toaster (retail value $99.00).

Sponsor reserves the right to substitute a prize of comparable or greater value in the event a described prize or any portion thereof is unavailable for any reason whatsoever. All federal, state and local taxes, as well as all other costs associated with acceptance and use of the prize, or the reported consequences thereof, and any other fees or costs associated with the applicable prize, are the sole responsibility of the winner. All prize details and conditions shall be at Sponsor's sole discretion, except as limited by law. Winner may not substitute, assign or transfer the prize or redeem the prize for cash. Sponsor makes no warranties and hereby disclaims any and all warranties, express or implied, concerning any prize furnished in connection with the Sweepstakes.  WITHOUT LIMITING THE GENERALITY OF THE FOREGOING, SUCH PRIZES ARE PROVIDED “AS IS” WITHOUT WARRANTY OF ANY KIND, EITHER EXPRESS OR IMPLIED, AND SPONSOR HEREBY DISCLAIMS ALL SUCH WARRANTIES, INCLUDING BUT NOT LIMITED TO THE IMPLIED WARRANTIES OF MERCHANTABILITY, FITNESS FOR A PARTICULAR PURPOSE AND/OR NONINFRINGEMENT.

GENERAL CONDITIONS: The Promotional Partners, Nuni and their respective advertising and promotion agencies, officers, directors, employees, representatives, members, shareholders and agents (collectively, "Released Parties") are not responsible for lost, late, incomplete, incorrect, inaccurate, stolen, delayed, misdirected, undelivered, garbled or illegible entries or email; lost, interrupted or unavailable network, server, Internet Service Provider (ISP), website, or other connections, availability or accessibility or other miscommunications; or failed computer, satellite, telephone or cable transmissions, lines or other technical failure; or jumbled, scrambled, delayed or misdirected transmissions; computer hardware or software malfunctions, failures or difficulties; or other errors or malfunctions of any kind, whether human, typographical, printing, mechanical, electronic or network relating to or in connection with the Sweepstakes, including, without limitation, errors or malfunctions that may occur in connection with the administration of the Sweepstakes, the processing of entries, the announcement of the prize or in any Sweepstakes-related materials. Released Parties also are not responsible for any incorrect or inaccurate information, whether caused by site users, tampering, hacking or any equipment or programming associated with or utilized in the Sweepstakes. Released Parties are not responsible for injury or damage to participants' or to any other person's computer related to or resulting from participating in this Sweepstakes or downloading materials from or use of the website. Persons who tamper with or abuse any aspect of the Sweepstakes or website, or who are in violation of these Official Rules, as solely determined by Sponsor, will be disqualified. Should any portion of the Sweepstakes be, in Sponsor's sole opinion, compromised by virus, worms, bugs, unauthorized human intervention or other causes that, in the sole opinion of Sponsor, corrupt or impair the administration, security, fairness, proper play or, or submission of entries, Sponsor reserves the right at its sole discretion to suspend, modify or terminate the Sweepstakes and, if terminated at its direction, select the winner from all eligible, non-suspect entries received prior to action taken. Entrants, by entering and participating in this Sweepstakes, agree that the Released Parties will have no liability whatsoever, and shall be released and held harmless by entrants from any and all liability or responsibility, for any costs, injuries, losses or damages of any kind, including, without limitation, death or bodily injury to persons or property resulting in whole or in part, directly or indirectly, from acceptance, receipt, possession, misuse and/or use of any prize or participation in this Sweepstakes or any Sweepstakes-related activity. Winner, by acceptance of prize, except where legally prohibited, grants permission for Sponsor and its designees and agents to use his/her name, address (city and state), photograph, voice and/or other likeness and prize information for advertising, trade and promotional purposes without further compensation, in any and all media now known or hereafter discovered, worldwide and on the Internet and World Wide Web, in perpetuity, without notice, review or approval. In the event of a dispute regarding entries received from multiple users having the same email account, the authorized subscriber of the email account at the time of entry will be deemed to be the entrant and must comply with these Official Rules. The authorized account subscriber is the natural person who is assigned the email address by the Internet Service Provider (ISP), online service provider or other organization responsible for assigning email addresses. In the event an insufficient number of eligible entries is received and/or Sponsor is prevented from awarding prizes or continuing with the Sweepstakes as described herein by any event beyond its control, including but not limited to fire, flood, natural or man-made epidemic of health of other means, earthquake, explosion, labor dispute or strike, act of God or public enemy, satellite or equipment failure, riot or civil disturbance, terrorist threat or activity, war (declared or undeclared) or any federal, state or local government law, order or regulation, public health crisis, order of any court or jurisdiction, or other cause not reasonably within Sponsor’s control (each a “Force Majeure” event or occurrence), then subject to any governmental approval that may be required, Sponsor shall have the right to modify, suspend, extend or terminate the Sweepstakes.  If the Sweepstakes is terminated before the designated end date, Sponsor will (if possible) select the winner from all eligible, non-suspect entries received as of the date of the event giving rise to the termination. Selection shall be each entrant’s sole and exclusive remedy under such circumstances. Only the type and quantity of prizes described in these Official Rules will be awarded.  These Official Rules cannot be modified or amended in any way except in a written document issued in accordance with law by a duly authorized representative of Sponsor.  The invalidity or unenforceability of any provision of these rules shall not affect the validity or enforceability of any other provision.  In the event that any provision is determined to be invalid or otherwise unenforceable or illegal, these rules shall otherwise remain in effect and shall be construed in accordance with their terms as if the invalid or illegal provision were not contained herein.