Home | Taking a Bite Out of Chicago's Latin Food Scene

Taking a Bite Out of Chicago's Latin Food Scene

Native Chicagoans know that good Latin food is around virtually every corner. With one of the largest Latino populations in the U.S., and more than one quarter of the city of Hispanic descent, there’s no denying that Chicago is more than a meat and potatoes kind of town.

It seems that there are just as many corner taquerias as there are Starbucks in Chicago, showcasing the city's heavy Mexican influence on both culture and food. And you can’t talk about food from Mexico without mentioning the city's King of Mexican cuisine: Rick Bayless. This Top Chef Master and James Beard award-winner has brought the rich and complex flavors of the different regions of Mexico to the Midwest masses, starting with his upscale spots Frontera Grill and Topolobampo.

“When we opened 26 years ago there was nothing like the food we were offering,” Bayless told TLK.  “I think the face of Mexican food in Chicago has changed dramatically.” As the city began to embrace more authentic Mexican flavors, Bayless opened the more casual Xoco, a street food inspired, corner eatery that boasts tasty tortas, posoles, and the best hot chocolate this side of the Rio Grande.

“I want our guests to have the entire experience at our restaurants,” he explained about the concept. “The art, music, the trained staff, bar program, wine program -- and, of course, the fabulous local agriculture.  That is a challenge we work on every day.”

While Bayless is the star of Chicago's Mexican culinary scene, many of his veteran staffers have gone on to open their own establishments, like Mixteco, a BYOB joint on an unassuming corner on the northside that churns out succulent conchinita pibil and decadent mole dishes. Chilam Balam, which brings intriguing small plates to the Mexican scene, was also nurtured by Bayless' hand. The current chef, Natalie Oswald, did her externship at Frontera Grill and Topolobampo. And Bayless couldn’t be more thrilled.

“I love seeing my sous chefs and former assistants out there opening up their own places in all different Chicago neighborhoods. It's about everyone having access to the amazing flavors of real Mexican cuisine.”

Next up, take a bite out of taquerias... 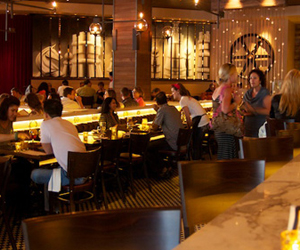 Beyond favorite old school taquerias like Taqueria El Asadero and Taco El Jalisciense, the one that welcomes all, but leans more toward the trendy, is Big Star. The Wicker Park pleaser is consistently chock-a-block with foodies, hipsters, and passerby bellying up to the bar for killer $3 tacos al pastor. Not far down the block, is cute Antique Taco, a shabby-chic blend of, yes, tacos and antiques.

Off the beaten path, but beloved regardless, is Cemitas Puebla which serves up its popular Milanesa sandwich (breaded butterflied pork chop on sesame bread) to hungry masses. Prepare to wait; the spot was made even more popular thanks to its appearance on the Food Network’s Diners, Drive-ins and Dives.

Back downtown, you can’t miss what the Sandoval Brothers are doing in Chicago with the striking Mercadito and Ryan Poli’s rich Spanish flavors at Tavernita (left) and Barcito.

“Chicago's Latino food scene is a vibrant one," says Alfredo Sandoval of Mercadito Hospitality. "We cannot forget some of the original flavors that have made Latino cuisine what it is today, but I think there is always room to grow, to create, and ultimately to meet the expectations of an ever-changing society and palate."

Next up, take a bite out of South American and Carribean cuisine...

How about some South American steak? On the northside, Argentinean Tango Sur and Colombian Las Tablas both please with their juicy steaks topped with delectable chimichurri sauce. And in the trendy West Loop neighborhood, the 40-seat Brazilian La Sirena Clandestina recently opened its doors to the public. A one-time pop-up by John Manion, the food was such a hit that he converted the place into a full-time eatery. Jumping away from the pack of kitschy gaucho joints, La Sirena is a celebration of street and comfort food of Manion’s childhood home of Brazil and boasts a menu filled with empanadas, grilled meat, and crispy sweetbreads.

Perhaps the epicenter of it all, often considered ground zero for many Chicago immigrants, is Maxwell Street Market. Now located past Maxwell Street on Des Plaines, this vibrant Sunday emporium started as a Jewish market in the early 20th century. Since, it has evolved into a full-on mercado selling everything from random knick knacks to some of the tastiest tacos in town. And while you no longer have to head over to Pilsen or Little Village to find authentic Mexican fare, it’s always worth a trip to experience the tried and true El Nuevo Leon, the down-home Mexican eatery that’s been serving refried beans and skirt steak to Chicagoans for fifty years.

“For so long French and Italian were all anyone could see as fine dining," Bayless explained about Chicago's food scene. He looks to what's happening in Mexico City right now, how Mexican chefs are creating alta cocina with traditional flavors, and changing the fine dining game.

"Mexican cuisine is not just having a moment, it's making a permanent place in our world as a mainstream cuisine.”  And with so many Latin options, Chicago is certainly staying the spotlight.