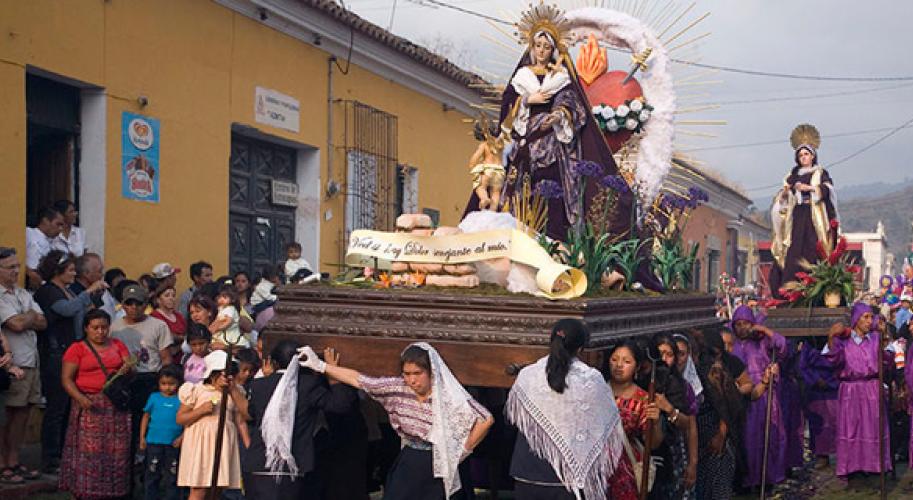 Though Mompox is a small town, and one that is a challenge or adventure (depending upon your point of view) to reach from Colombia's main cities, it is host to one of Colombia's most storied Easter Week celebrations. In fact, according to local blogger Luís Alfredo Domingúez Hazbun, the town's Easter observances are among the reasons Mompox was granted World Heritage status by UNESCO in 1995. The town's six churches all play an important role in the Semana Santa observances, as the faithful proceed from one to the next for blessings and religious ceremonies, many of them dressed to represent certain figures in the resurrection story.

Food features prominently in one of the observances that takes place during Holy Week, El Paso de la Última Cena. On Holy Thursday, a massive table is set with fresh fruit that's typical of the region; figures representing Jesus and the 12 Apostles sit at the table, which is so heavy that it can't be carried as part of processions.

Given its location next to a river, it's not surprising that fish is the main dish on the Easter Week menu here. Bagre is the local catch of choice; it's a mild, white-fleshed fish that may be served whole or in a guisado.

Holy Week is celebrated among Catholics and other Christians in the Dominican Republic, but the días feriados also provide a good excuse for some secular fun, too, Many city dwellers head for the coast en masse, so many, in fact, that the police, Red Cross, and other emergency response teams put annual special operations in place to prevent car accidents, drowning, and alcohol-related injuries and deaths.

Head away from the beach for some traditional celebrations and food, including habichuelas con dulce, a sweet bean dish that's served as a dessert; it consists of red beans, raisins, cinnamon, sugar, coconut milk, evaporated milk, cloves, and batatas. An important part of serving this particular dish during Easter Week is sharing it with friends and neighbors, so if you're keen to replicate the recipe at home, make sure you prepare a big batch.

Guatemala's Holy Week celebrations are probably most well-known for their alfombras, “rugs” made of colored sawdust or flowers, fruit, and vegetables, which decorate the streets; they are made by people who are thanking God or the saints for favors or miracles. Some of the rugs can stretch for blocks; others are slightly less ambitious. They are all emphemeral; the faithful on their processions trample the rugs, which are then swept up by street cleaners.

TLK contributor Karen Catchpole said Antigua is the best place in Guatemala to see these street carpets; the city is estimated to receive more than 200,000 visitors during each year's Semana Santa celebrations. It's also a great place to try some of Guatemala's most iconic Holy Week meals.

Fish is prominent on Guatemalan menus during Semana Santa. Look for plates like pescado seco (dried fish), bacalao a la vizcaina (codfish, Vizcaina-style), and codfish fritters. Also look for sweet dishes, such as sweet garbanzos and molletes. Unlike the savory Mexican breakfast dish by the same name, Guatemalan molletes are made of a sweet bread dressed with cream, sugar, and cinnamon, and finished off with a bath of water, honey, and liquor before being fried.