In 1890, Francisco Alfredo Pellas built a sugar distillery in northern Nicaragua to produce a beverage that was drunk by plantation workers to celebrate the harvest. The resulting rum proved popular and production was increased, refined, and expanded over the years, ultimately passing through five generations of the Pellas family. That humble beverage has turned into one of Nicaragua's most delicious exports: Flor de Caña rum. 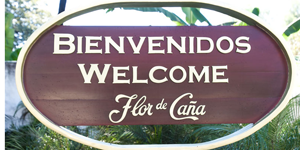 These rums are available in 40 countries (including the United States) and they’ve taken home more than 100 international awards since 2000, including Gold and Best In Class in the Spirit category of The International Wine & Spirit Competition 2010 in London and multiple golds at the San Francisco World Spirits Competition 2011

During nearly six months in Nicaragua, I became a fan, so when Flor de Caña debuted the first tour through part of its vast rum making operation in October of 2012, I was among the proud locals and curious tourists eager to get an inside look at how the rum is made.

It’s All in the Aging 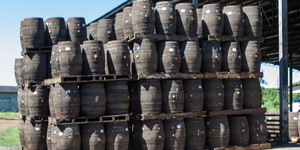 The heart of the tour was an explanation of what Flor de Caña calls the “Slow Aged” process, a term the company has patented. My guide explained that making rum is a relatively simple process of distilling and aging sugar cane juice. The differences come, he said, during the aging process. Every drop of Flor de Caña rum is slow aged in white oak barrels previously used to age whiskey or bourbon in the United States. In fact, many of the thousands of barrels used by Flor de Caña come from Jack Daniels and these barrels impart natural color and flavor to the rum.

Filled barrels are carefully stacked and housed in enormous warehouses where nature is allowed to take its slow, slow course. Our guide claimed that Flor de Caña is one the only rum maker who practices patience like this. The others, he said, add artificial colors and other “age accelerating” ingredients to hasten the process.

Heritage in a Glass

A highlight of the tour was a visit to the swanky Reserva Familia tasting room where snifters of 18 year old Centenario rum were waiting. First we held our snifters up to the light to appreciate the amber color of the rum. Then we swirled the rum to evaluate the “legs” as the liquid slid down the sides of our glasses. Then we stuck our noses into the snifters and teased out a mix of aromas—from sweet to spicy. Finally, we got the go-ahead to taste the smooth rum which hit my palate with lots of vanilla, caramel, and pepper.

How to Buy Quality rum

My favorite part of the Flor de Caña tour, however, was the chance to take home pro tips about how to spot, test and buy quality rum.

Wash your hands with it: A pure rum containing nothing more than expertly distilled and aged fermented sugar cane free of artificial accelerators is not sticky. I had trouble believing that myself until my guide urged me to wash my hands with a bit of Flor de Caña rum. Sure enough, no stickiness at all.

Check the label: If you see the word “Solera” on the label you know that the rum was not slow aged but accelerated with additives. It’s also very possible that the contents of a “solera” rum have been blended, mixing together rums from different vintages. And speaking of numbers…

Don’t believe the numbers:  My guide explained that a common and totally legal practice allows just a portion of the rum in a bottle to be aged as long as the label says. The rest of the contents can be rum that’s been aged for a shorter period of time and/or any elements that were added to speed up aging.

Location: The Flor de Caña tour spot is about two hours from Managua or 40 minutes from Leon on the outskirts of Chichigalpa in northern Nicaragua. There is a large, secure parking lot near the entrance.

Hours: Tours are offered seven days a week except on major holidays at 9 am, 11am, 2pm, and 4pm.

Prices: Tickets are $23 per person for a two-hour tour in English or Spanish and include a tasting of 18-year-old Centenario rum and a rum cocktail at the end of the tour in the barrel-shaped museum and gift shop. Reservations are required.

Flor de Cana Rum from Nicaragua, How to Buy Rum