In Argentina, the asado steals all the limelight. It’s the smoky rockstar of national cuisine, and rightly so: flames, meat, Malbec, sunshine, and good friends, all consumed and enjoyed over the space of hours over any given weekend. In the shadows though, everybody knows what dish really pulls the strings of the Argentine belly, it’s the humble, breaded slice of beef, the milanesa.

Like so much in Argentina, milanesa has roots in Italy. The origins of the dish (a thin steak, simply breaded and fried) have been traced back to Milan and the cotoletta alla milanesa. An Argentine translation that's rather more sensible than the German wiener schnitzel or the Japanese tonkatsu.

If the milanesa is king, the sandwich form is the foot-soldier; it is everywhere, in train stations, subway kiosks, rolling food carts, gas stations, and roadside cafes the length and breadth of the nation. The quality varies from warm and crunchy, made in the moment, to rubbery and oil-soaked. On the road it’s easy to find the good ones, just follow the trucks.

The classic sandwich (un sanguche de milanga – slang for milanesa sandwich) is with tomato and lettuce, mayo optional but suggested. You can also go completa, which adds on some cheese and ham. At home though, it's the milanesa straight up. Slice off a few cutlets from a hunk of peceto (round roast) or nalga (eye of round), cutting against the grain of the meat. These cuts are chosen for the lack of fat and sinew, which make the milanesa curl up as you cook it. If you don’t have an accommodating butcher or large hunks of roast and a very sharp knife, you can buy good quality veal steaks and, covering them with plastic wrap, use a meat tenderizer to flatten them out.

Now here’s the key, leave your thinly sliced meat (less than 1/4 inch) soaking for at least an hour in a mixture of whisked egg, a splash of milk, finely chopped garlic and parsley. Time duly passed, slap them into your breadcrumbs, the fine, crunchy store-bought kind, and into a frying pan with a shallow layer of cooking oil. (You can also do them in the oven on a baking tray to avoid using as much oil.)

A couple of minutes each side and the world is your golden-brown, crispy, breaded oyster. Just squeeze over some lemon and you're ready to rock. You could try the classic milanesa a la napolitana, which requires a topping of tomato salsa, ham and soft white cheese, and a little time under the grill. (This time the name has nothing to do with the Italian city, rather the name of the Buenos Aires pizzeria where it was first served, El Nápoli.) Another staple is a caballo, with two fried eggs on top. Really, though, you can top your milanesa with anything you like – mozzarella, rocket and prosciutto, four cheeses, creamed spinach and parmesan or pancetta, blue cheese and caramelized pear.

The best place to get a great milanesa in Buenos Aires will always be at home, cooked by someone’s mother. Failing that, nearly any parilla or café will have them on the menu. An institution and great to visit is the bodegón, a hole-in-the-wall part-grocery, part-diner like El Preferido de Palermo (Borges 2108 +54 011 4774 6585), a Buenos Aires mainstay. A few other options to try are Hermann (Santa Fe, Av. 3902 +54 011 4832 1929) ostensibly a German restaurant that serves up a great milanesa a la napolitana; Los Chanchitos (Angel Gallardo, Av. 601, Caballito +54 011 4857 3738) with their mind-boggling pizzanesa; or try Club de la Milanesa, not the best, nor the cheapest, but they deliver, and they have more than 20 toppings to choose from. Enough said.

If you can't get to Argentina, however, here are three recipes to get you started. 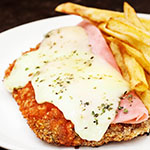 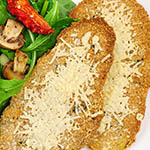 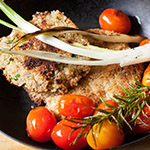