Micro-breweries have popped up in Costa Rica, Honduras, El Salvador and Panama and they’re just the beginning of a Central American brew revolution. Here's a brief guide to beer-guzzling your way through Central America. 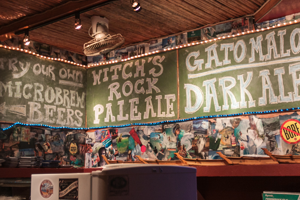 Cheers:  In late 2011 the Volcano Brewing Company opened on the road that winds around Lake Arenal, the largest lake in Costa Rica, between the towns of Cañas and the tourist hub of La Fortuna, a popular destination for zip lining, waterfall exploration and visits to Arenal Volcano National Park. Stop by for a Witch’s Rock Pale Ale or Gato Malo nut brown ale on tap ($3 per 12 oz. glass) and spectacular lake and volcano views. Owner Joe Walsh, a California transplant, also owns Witch’s Rock Surf Camp in Tamarindo on Costa Rica’s Pacific coast and his craft beers are served there too.

Also look for: Costa Rica Craft Brewing, in Cartago, which opened in January of 2011 and put on the country’s first (but not last) craft brew festival in 2012. They make an ever-changing roster of beers and have relatively wide distribution across Costa Rica.  Both Treintaycinco Fabrica de Cervecas (Beer Maker 35) and La Perra Hermosa Coastal Brewery plan to begin making beer in 2013. You can bet that any quality Costa Rican microbrew will be offered at 8ctavo, a farm to table restaurant and bar on the roof of the new Sonesta Hotel Casino in the Escazú area of San Jose which will open in early 2013.

Cheers: Andy Newbom likes beer and while El Salvador’s Pilsner or Suprema are fine if that’s all you’ve got, this California transplant wanted a better brew - so he decided to make it himself.  Andy calls it a Brew Revolution and in June of 2012 he opened El Salvador’s first craft brewery on El Tunco beach.

Here Andy offers six different beers including Venus Wit, a Belgian tropical wheat beer made with local passion fruit and pineapple, and Nyx Black Ale, an American Black Pale Ale with hops and coffee, plus three seasonal beers ($4 for a 12 oz. bottle or draft, $5 for a 16 oz. bottle or draft). He’ll also be offering special barley wines for $6 to $7 and his beers have just been added to the menu at bars and restaurants in six different cities across El Salvador, including the capital.

Also look for: Cadejo Brewing Company will debut in 2013 with La Roja, an American Red Ale and WAPA, an American Wheat Ale plus rotating specialty brews in a new brewpub in San Salvador’s Zona Rosa. 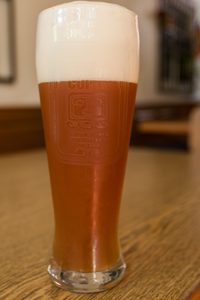 Cheers:  Thomas Wagner is serious about beer. Serious enough to drive 10 miles for his spring water. Serious enough to wear a lab coat while he brews. Serious enough to import all of his equipment and ingredients from his native Germany where he’s won awards for his beers.  In 2010 Thomas opened Sol de Copán brewery and beer hall in Copán, Honduras where he makes strictly German-style beer. You’ll find two rotating brews on tap at a time ($3 for a half liter) along with a short menu of German dishes (spetzel, schnitzel) made fresh by Thomas’ bubbly Honduran wife.

Also look for:  D&D Brewery Lodge & Restaurant on Lake Yojoa. Honduras’ first microbrewery is still serving brews on tap made by a Honduran who was trained by the original owner.

Cheers: Panama City has not one but two microbreweries. La Rana Dorada, with two locations in the capital, opened in 2010 and offers more than 40 beers from around the world including four they brew in a facility adjacent to their brewpub in the hip Casco Viejo neighborhood. Istmo Brewpub, in the El Cangrejo neighborhood, was founded in 2005 and now brews four craft beers and serves classic pub fare (burgers, ribs, burritos).

Also look for: International Beerfest Panama, the first ever beer festival in Panama, will be held January 18 and 19, 2013 in Panama City. Organizers will welcome beers from around the world including 12 beers made in Panama and they hope to make this an annual event.  In March the country’s first festival just for microbreweries will be held.