“In other countries, men would weep, priests would renounce their gods, children run crying to their mothers, but in Uruguay it is beloved, revered. It is, in fact, the national dish…”

For any true lover of sandwiches, there may well be weeping over the chivito, but they will be tears of reverence and joy. This mighty sandwich, a shrine to carnivorous decadence, the scourge of arteries and vegetarians, is consumed daily in massive quantities throughout the country of Uruguay, but particularly in the capital, Montevideo, and nearby Punte del Este, where it originated.

One evening in 1940, Marcelo Gallardo, owner of a small beachfront restaurant called El Mejillon, found himself faced with a request for a dish he didn’t have. So, he did what any good chef would do – he winged it. The story goes that a tourist walked in and requested baby goat’s meat (the Spanish word is chivito), something she had tried in Córdoba and had thoroughly enjoyed. Marcelo, not surprisingly without baby goat meat lying conveniently at hand, whipped up a sandwich of buttered and toasted bread, a thin slice of grilled beef and ham. The lady swooned; the rest is history.

At its peak, El Mejillon is said to have kept two local butcheries in business with the sale of its chivitos. An iconic spot on the Punta del Este promenade, or rambla as it is locally known, it closed up shop in the 60s, but the legacy of its most popular dish lives on.

Like so much in life, the secret of this great sandwich is quality and simplicity. Taking up where El Mejillon left off, the owners of Bar Tinkal have spent over forty years honing the chivito, and have firmly established themselves as the home of the best chivito in Montevideo. At the heart of their success is a hearty 4 ounce slice of export quality filet. Add a few slices of tomato, lettuce, top quality smoked pancetta, and mozzarella onto a fresh white bread roll and you have some serious sandwich magic. 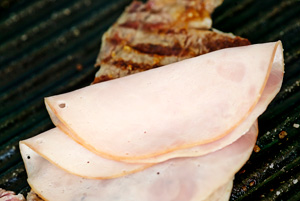 Diehard fans would say that without the third meat layer of ham and a dash of salsa golf, a mix of ketchup and mayonnaise, the chivito falls a step short of the divine. Another addition common in Montevideo is egg, usually a halved, boiled egg, or in the case of the Chivito a la Canadiense (Canadian style), fried and balanced on top. 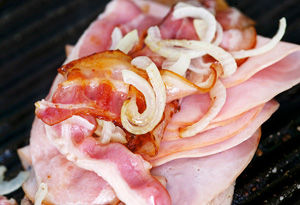 Diego Pérez Bello, owner of Bar Tinkal always suggests that people try the original chivito before they make additions and subtractions to the classic recipe. He was right, the Tinkal classic was the best chivito I have found to date, though sometimes, I can’t help but crave the more common street style chivito that comes with a dash of big and messy. 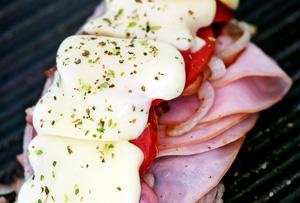