As my taxi rounded the corner onto restaurant-filled 69th street in Bogota, Colombia one place outshone them all. Petite, two level Criterión sparkled with lights, warmth pouring out of every enormous window. Inside, it was stunning, with a palette heavy on metallics and lavender, dangling oversized showcase light bulbs twinkling overhead, curved furniture both inviting and discreet, and 3-D wallpaper inspiring double takes. The crisp wait staff carried iPads and smoothed Frette table linens as a quiet jazz soundtrack played.

The meal was also meticulously elegant. Created by executive chef Jorge Rausch, the wide-ranging French menu at Criterión is held together by sauces that combine traditional techniques, mastered during Rausch’s years of cooking at a two-Michelin start restaurant in Europe, with vibrant Latin color and unexpected local ingredients.

The lion fish tiradito was succulent and subtle but it was the tongue tingling lulo gelatin sauce that made the dish. The smoked confit of salmon was dramatic, served under a smoke-filled dome, but it was the rich sorrel and hazelnut pesto that I remember most. The seared scallops with deep fried pork belly were utterly satisfying, but the parsley sauce was as complete as creamed spinach but much, much brighter. 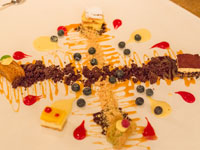 Criterión can be playful as well. Take, for example, the Dessert Placemat. First, a white silicone mat is placed over the tabletop. Then a cart arrives heavy with the tools of the trade–rich sauces, fresh berries, at least two flavors of homemade ice cream and half a dozen fresh made indulgences including tiramisu, key lime pie, cheesecake, and more. Then the pastry chef artfully arranges these ingredients on the mat until he’s created an edible tableau so ample that it comes with a deep spatula for mixing and grabbing.

In 2014 Criterión clocked in at number 19 on the list of the 50 Best Restaurants in Latin America but Criterión is just one example of the culinary stylings of the Rausch brothers. With brothers Mark and Jorge concentrating on the kitchen and brother Ilan heading up the business end of things, the trio have also created Marea by Rausch in Cartagena, which classes up the city’s convention center with snazzy aquamarine and taupe décor and hand-painted Escher-esque 3-D wall coverings that make it appear as if fish are leaping into the dining room.

Marea’s enviable waterfront location (a rarity in this coastal walled city) is an 80-seat haven of casual, Caribbean chic with an ambiance that begs for a glass of crisp white wine and a seafood heavy menu. In fact, the menu features large and satisfying dishes like beef carpaccio-topped Caesar salad, perfectly tender grilled octopus, and a succulent whole fish that somehow arrives intact with but every single bone expertly removed. Then there’s casual and eclectic Bistronomy with two locations in Bogota offering gourmet international comfort food (when was the last time you saw fish and chips and Hungarian beef goulash on the same menu?) plus Kitchen by Rausch in Barranquilla and Gobernador by Rausch in Cartagena. In 2015 plans are underway for the opening of a Rausch Energia Gatronomica restaurant in Medellín and a Kitchen by Rausch restaurant in Pereira, Colombia.

It’s all a very, very long way from Poland. In the 1920s the first Rauschs immigrated to Colombia from Poland in search of gold. They never found any but they stayed anyway and shifted gears. Mark, Jorge, and Ilan’s mother opened one of the first bakeries in Colombia and the kitchen arts were obviously handed down to her sons.

That baking heritage is front and center in the Rausch’s new partnership with Colombia’s Juan Valdez Cafe chain that has the brothers supplying baked goods to the country’s homegrown answer to Starbucks. Jorge is a judge on Master Chef Colombia and Mark makes guest judge appearances for pastry competitions.

The duo have also authored three cookbooks, Cocina de Fin de Semana, Sal & Dulce, and, most recently, Lion Fish. Published at the end of 2014, their latest cook book is full of recipes for preparing the invasive and voracious species of fish that is decimating Latin American reefs by devouring native species. Jorge has partnered with national and international foundations, including the Clinton Foundation, to fight the lion fish invasion and he believes that if more people learn to eat lion fish (which has mild, flaky white flesh) it will reduce their numbers and provide work for impoverished fishing communities.

Now the Rausch brothers are taking their culinary gold across borders. They opened their first restaurant in Costa Rica, inside the Sheraton Hotel in San Jose and the island of Curacao will get a Marea by Rausch restaurant this year.