Home | How To Prepare Chayote

How To Prepare Chayote 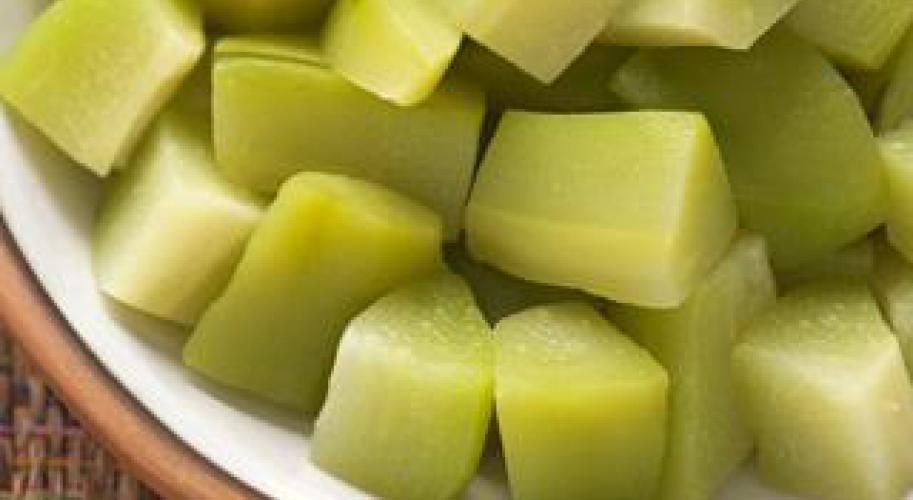 Chayote (chi-OH-tay) is a light green, somewhat pear shaped member of the cucurbitaceous family, that originates from Mexico. The mild taste of this unusual looking fruit can best be compared to a cross between a cucumber and an apple, and the crisp crunch also bears a similarity to these foods. The thin skin of the chayote fruit is wrinkled and furrowed and is often covered with tiny spines that feel like fine hairs. Healthy eaters will appreciate the fact that chayote is low in calories and sodium, while still providing high levels of potassium and vitamin C.

When selecting chayote, look for fruits which are firm to the touch with a little yield and bruise-free. Overly soft and sticky chayote, as well as chayote which have started to sprout shoots out of the broad end, are overripe and best avoided. The fruit can be thinly sliced and put into salads raw, or cut into sections or cubes to be puréed, sautéed, boiled, steamed or baked. The mild flavor of chayote makes it a bit of a culinary blank slate; the fruit is often marinated, or prepared with a variety of spices to provide a fuller flavor.

Your first step is to peel off the skin. You’ll either want to wear disposable gloves for this step or peel the chayote under cold running water, as the fruit is known to ooze a slightly sticky substance when peeled. While this substance is completely nontoxic, it may irritate sensitive skin. Hold the chayote firm in one hand, and slice the skin off with a common vegetable peeler, rotating the chayote while peeling, as you would a potato. 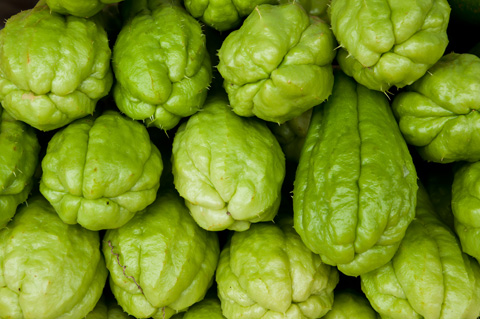 Your next step is to cut the chayote down into more manageable sections. Place the skinned chayote on a cutting board, cut the fruit down the middle, and then cut the halves into quarters. Carefully remove the large seed pieces inside each quarter by cupping it in one hand and carefully scooping the seed out with your knife. A small spoon will also work for removing seeds.

From here, how you cut the chayote will depend on how you intend to use it. If using the fruit raw to put in a salad, cut the chayote crosswise in 1/4 inch thin slices. If you plan on boiling, steaming, baking or pureeing the chayote, you can cut the quarters lengthwise into 3 or 4 thick strips, and then cut these strips crosswise into chunks of approximately 1 inch. You’re now ready to finish preparing the chayote according to whatever recipe you’re using.

Corn Pudding with Chiles and Shrimp