Up a stately driveway lined by Italian cypress, past the manor house and overlooking acres of vines, the tasting room at Cubanísimo Vineyards looks like so many in this neck of Oregon’s Willamette Valley. But as you approach the entrance, the distinct beat of timbales and the jubilant strains of charanga tell you that this is not your typical Oregon winery.

Inside, conga drums, Havana travel posters, and a bowl of plantain chips combined with a Cuban soundtrack lend a tropical sabor to the space, where tasters sip the winery’s prized Pinot Noirs. Dressed like the quintessential gentleman winemaker in a black wool beret and glen plaid sport coat, Dr. Mauricio Collada, owner of Cubanísimo, expresses surprise at the success of his nine-year-old winery.

“When you start any enterprise, you never know how it’s going to be received,” Collada explains. “Cubanísimo has been warmly embraced, I think because Oregonians are pretty open-minded. It’s not like they judge you because you have an accent.”

A native of Havana, Collada first experimented with winemaking while attending medical school in Florida. Intrigued by the fermentation process, he attempted to make wine from mangoes and bananas. He introduced his finished product to friends and family at a party that, he recalls with a grin, turned into the kind of evening “where every joke is funny.”

Collada’s serious winemaking career happened almost by accident. It wasn’t until after he had accepted a neurosurgeon position in Salem, Oregon that he realized he had landed in one of the country’s most prominent Pinot Noir regions. Given his passion for Pinot, Collada purchased 21 acres of land, planted vines, and consulted with local winemaker Rob Stuart.

What sets Collada apart from other Oregon producers is the injection of his Cuban heritage into the winemaking process. “I lean toward a medium-bodied Pinot Noir that won’t fight with the flavors that are common in Caribbean cooking.” This food-centric approach to wine, he believes, is cultural.

“As Latinos, we have in our subconscious this amazing repertoire of flavors, thanks to the variety of Latin cuisine,” he states. Citing scientific evidence that women are equipped with a keener sense of smell than men, he adds that Latinas “have the genetic prowess to enjoy and appreciate flavors 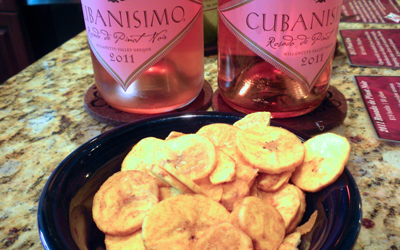 Collada’s favorite aspect of winemaking can be summarized in one word: People.

“With wine, you don’t just meet people at a superficial level, you get to know their souls,” he says. “We’re here to connect, and is wine not the perfect way?”