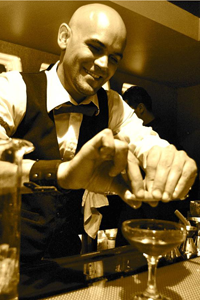 For Freddy Diaz, president at mixology consulting firm AlambiQ in Miami, cachaça is not just an obscure spirit reserved only for the classic Brazilian caipirinha, but a versatile liquor that can be substituted in many classic cocktails and bring earthy notes to innovative creations.

Having worked closely with cachaça and rum brands like Cuca Fresca, Rhum Clément, Ron Diplomático and Ron Dos Maderas, TLK asked Diaz how cachaça differs from rum, how it can be used in cocktails to best accentuate it's unique characteristics, and how it can move back into the spotlight.

TLK: What is cachaça?

It's a Brazilian spirit made from fermented sugarcane juice and usually aged in woods native to Brazil, except for silver cachaças such as Cuca Fresca, which are aged in English Oak. Aged cachaças usually spend two to twelve years in wood and in general, cachaças are bottled around the range of 38 to 51 percent alcohol by volume.

TLK: What are the typical characteristics of cachaça?

Cachaças are closest in similarity to other sugarcane-based spirits like the rhum agricoles produced in the French West Indies. The sugarcane is fermented within 24 hours of harvesting and that is the difference between cachaças and other rums, which are mostly made from molasses. Rums have no limit as far as where they are produced and how they are aged, but each origin has different specifications on how they are produced. Cachaças also have an earthier scent and taste of fresh vegetation with a hint of spice and they're not overly sweet. Cachaça's nuances really lie in the way the product is distilled, filtered, or aged, and the subtle flavors that result.

TLK: What is the best way to use cachaça in a cocktail?

Cachaça taste great as a base in most any cocktail as long as you use fresh ingredients. It can even substitute beautifully for gin in some drinks, or in daiquiris, Mai Tais, and Swizzles. You can use it in an old-fashioned, Navy Grog, or in non-rum cocktails like the Clover Club. Its earthy, light notes make for a well balanced drink.

TLK: How do you know a quality cachaça?

It really takes research and plenty of tasting. For example, Cuca Fresca does a double distillation in a copper pot still and filters the product three times, which requires more nuance and craft. It can be hard to distinguish between products judging by what's written on the labels, so try a few to find what you like. Weed out products that may taste overly sweet, perfumey, or off-balance. They should hit every sense on your taste buds and they should not be overly pungent.

To help you get the taste test started, Diaz shared one of his recipes with TLK. 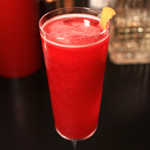