Home | Why Spanish Cava Should Be Your New Favorite Wine

Why Spanish Cava Should Be Your New Favorite Wine

As Valentine’s Day approaches, thoughts turn to romance, including quiet dinners for two and special gifts. Everybody knows the old adage, “All that glitters isn’t gold,” and that’s okay—there’s certainly no reason to turn your nose up at platinum or precious stones. It’s equally important to remember, “All that bubbles isn’t Champagne.” When it comes time to pop the bubbly on February 14 (or any time) Spanish Cava is one of our favorites. Here's a primer. 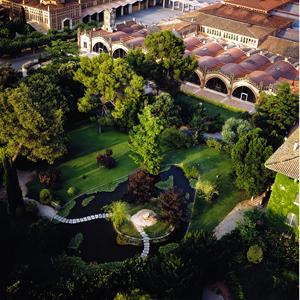 The name "Cava" comes from the cave or wine cellar where it is made. The tradition of sparkling wine in Spain dates back to the middle of the 19th century, and it is said that the first Cava using the traditional method (the same method used to make Champagne) was produced in 1872 by winemaker Josep Raventos of Codorniu, the largest producer of Cava in Spain (grounds, left). There are now close to 300 wineries that make Cava, and while you won't find many of those bottles in US wine shops, some of the best are imported to this country and can be easy to locate. In addition to large houses such as Codorniu and Freixenet, it's easy to find bottles from Juve y Camps, Jaume Serra, and Segura Viudas.

Now, just as Champagne can only be made in the Champagne region of France, Cava has Denominacion de Origen, or DO status, meaning that it can only be produced in specific geographical areas using only approved grape varieties. Officially, Cava can come from eight different places in Spain, but it bears mention that 95% of it comes from the Penedes region in Catalonia, mostly from the town of Sant Sadurni d’Anoia, which is known as the Capital of Cava.

Cava can be made from just one grape, but it is generally a blend of different varietals. The most commonly used grapes are Macabeo, which add nice floral notes to the wine, Parellada, which bring citrus flavors as well as flowery notes, and Xarel-lo, which also bring fruit flavors in addition to bright acidity. Other grapes, such as Chardonnay, Pinot Noir, Malvasia, and Grenache can also be used. And just like Champagne, Cava comes in both white and rosé styles. The addition of sugar and yeast for a second fermentation—that’s what causes the bubbles in sparkling wine—adds soft flavors of rising bread and buttered toast.

Over a glass of Codorniu Cava, we asked Bruno Colomer, their current winemaker, which bottle he would open for Valentine’s Day and pairing a specific Cava with a dish for a romantic dinner. “I think the most versatile choice is a bottle of Anna de Codorníu, soft with elegant citrus notes. It matches perfectly with sushi and sashimi. You will have great romantic dinner in a good Japanese restaurant. I'm pretty sure it will be a night to remember.” We also think it is a great match with the flavors of seafood and citrus in ceviche, especially these versions from chefs Jose Garces and Richard Sandoval.

Not everyone will be spending Valentine’s Day with a loved one, so we also like the idea of inviting over your single friends and having a tongue-in-cheek Broken Hearts Club party, featuring Spanish bubbly and tapas. We asked Bruno for his advice on this, and his suggestion is: “Cava is a fantastic sparkling wine for a tapas party because it matches with all kind of dishes including desserts. I recommend Codorniu Classico, an elegant and fresh cava with fine bubbles.  Some tapas that could be a great options are Galician octopus with potatoes and a touch of paprika, arroz negro with squid, roasted beef and pepper, and for dessert pair with chocolate.”

We really like the idea of Codorniu Classico with pulpo Gallego, but we think an interesting alternative for a party is Adobo Octopus with Potato Salad.  If cooking with squid ink is not your idea of how to spend Valentine’s Day, Scallop Ceviche on Black Pasta Cakes is filled with the same flavors as Spanish black rice. Also ideal with Codorniu Classico are the rich flavors of  Piquillo Peppers Stuffed with Beef Oxtail, which are right in line with Colomer’s suggested roasted beef and pepper.

And as for the chocolate? Hey, it’s Valentine’s Day, and even your most cynical friend is sure to smile when you hand over her very own shiny red heart-shaped box filled with chocolatey goodness.