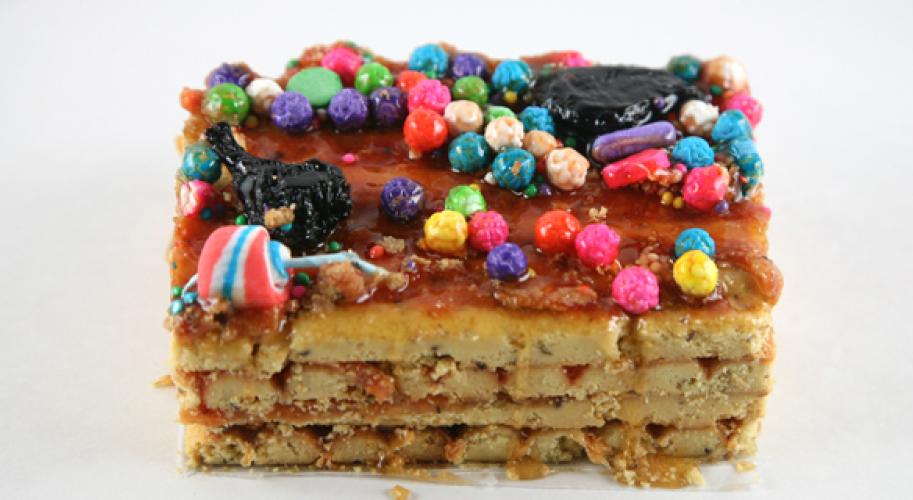 In Lima, Peru, the month of October is called El Mes Morada, or the purple month. During this time, El Señor de Milagros, or the Lord of Miracles, a procession of tens of thousands of the faithful, dressed in purple, marches through the historic center of the city on select days. Forever tied to these processions is a layered, anise flavored, sprinkle covered sweet called Turrón de Doña Pepa.

The processions pay homage to an image of Christ that was painted on a wall by an West African slave in the Las Nazarenas Church in the district of Pachacamilla. In 1655, a massive earthquake struck Lima and much of the center was in rubble. However, on the wall of Las Nazarenas, the image of Christ remained, and has since been credited with performing hundreds of miracles, including one for Josefa Maraminillo, the believed creator of Turrón de Doña Pepa. The Afro-Peruvian woman known as Doña Pepa, possibly a slave from the Cañete Valley south of Lima, suffered from paralysis. After praying to El Señor de los Milagros, she no longer felt any pain.

Eternally grateful, Doña Pepa wanted to give back. In a dream, saints appeared to her and gave her the recipe. The next day she walked through the crowds at Las Nazarenas and began to hand out the god given recipe, a sort of layered anise flavored nougat drizzled with chancaca syrup and topped with sprinkles and candy. Every October thereafter she would come to Lima, and distribute her sweets, which made it known as Turrón de Doña Pepa. These days, every October in Lima, Turrón de Doña Pepa is a common sight at the El Señor de Milagros procession. Dozens of street vendors sell freshly baked versions of the sweet, and in keeping with tradition, give out free samples.

Though you can find Turrón de Doña Pepa prepackaged in grocery stores (and the airport) year round, the best versions are freshly baked and found in neighborhood pasterlerias and corner bodegas. There are even Turrón de Doña Pepa chocolate bars and top pastry chefs in Lima will occasionally reconstruct the flavors into cheesecakes and other sweets. Want to try it at home? Here, the recipe for Lima's miracle dessert.