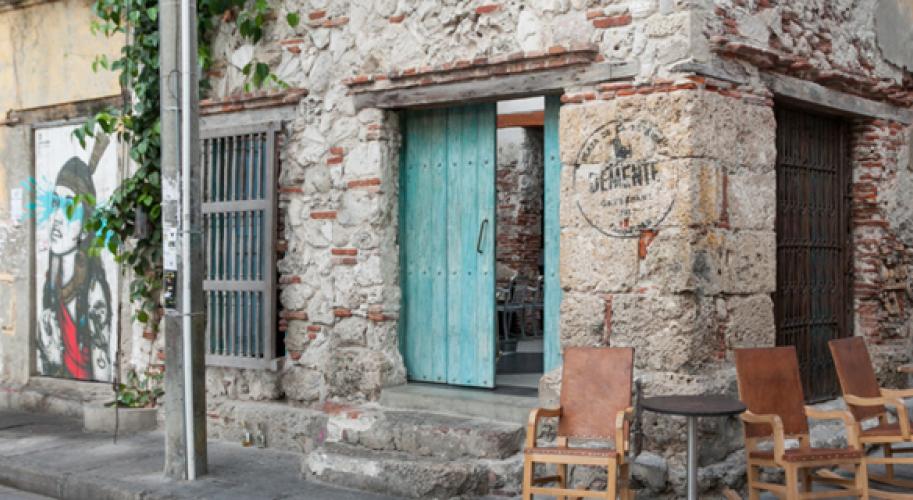 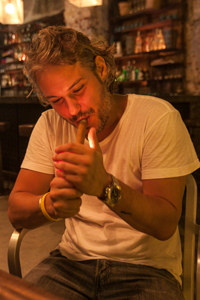 Nicolas Wiesner (left), owner of Demente Tapas Bar in Cartagena, Colombia, is smokin’. No, really. When I walked into the tapas bar he opened on bustling Plaza de la Trinidad in March, in the fast-gentrifying and artistic Getsemani neighborhood, he was puffing away on a fat Cuban. He was also sitting in a rocking chair.

The sidewalk in front of Demente, which was constructed in three months on a lot that had stood empty for 20 years, is peppered with welcoming, classic wood and leather rocking chairs arranged around cocktail tables—a hipster take on the habit of area residents who drag their rocking chairs out in front of their houses to catch the evening breeze and the day’s gossip.

Inside Demente there are 10 aluminum rocking chairs which Nicolas fell in love with at first sight. After the sticker shock wore off, he splurged on one. The nine others followed faster than a shotgun wedding. “They’re the most expensive thing in the restaurant,” he says. And Demente is also the only restaurant in Cartagena with a retractable roof. “I wanted to be as much a part of Plaza Trinidad as possible,” says Nicolas as the smoke from his Cuban rises slowly to the sky.

Nicolas, a Bogota native, did not start off as a restaurateur. He studied finance, and then became a stock broker. He hated it. He chucked it. Then he went to Madrid and started studying for an MBA. He chucked that too and trained as a chef instead, eventually working in tapas restaurants including La Tasquita en Frente, where he learned to value quality over quantity.

His 14 item chalk board menu reflects that with dishes ($4 to $8) including addictive flash fried sweet peppers and a brochette of remarkably tender shrimp and sweet diced tomatoes. Fried local cheese with onion marmalade can be likened to eating a gourmet grilled cheese sandwich without the bread and the addition of secreto de cerdo, a lesser-known cut of pork from 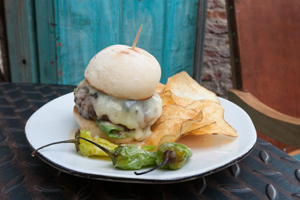 behind the shoulder. The most popular plate of all (and for good reason) is a sweet, rich, satisfying oxtail slider (right) served with homemade potato chips.

Go ahead and lick your custom-made plates clean to reveal a quote from Colombian poet Raúl Gómez Jattin hand painted onto it.

Demente is as much a bar as an eatery with a comprehensive list of liquors, wines and beers – including hard-to-find Aguila on tap. Bar staff laboriously make ice cubes the size of naval oranges which are perfect in the near equatorial heat which reduces normal ice cubes to water in mere minutes, prematurely diluting that delicious 20-year-old Colombian rum you just ordered.

While in Spain, Nicolas was particularly fond of a tapas place in Madrid called Juana de Loca (aka Crazy Juana).  As an homage, Nicolas wanted to name his tapas bar Juan de Mente (aka Demented Juan). However, being that there many chefs named Juan in Cartagena, he dropped the “Juan” but kept “de Mente.”

The “crazy in a good way” vibe is helped along by eclectic touches. His business cards are bottle caps printed with the Demente name, logo and vitals. He hands out temporary Demente tattoos.  And the art in Demente takes the form of mirrors etched with the images of Nicolas’ crazy heroes. Steve Jobs, Michael Jackson, Andy Warhol, Amy Winehouse, Lady Gaga and more are immortalized along with iconic quotes about the benefits of a touch of madness. It’s a rogues’ gallery of creative crazies and Nicolas fits right in.