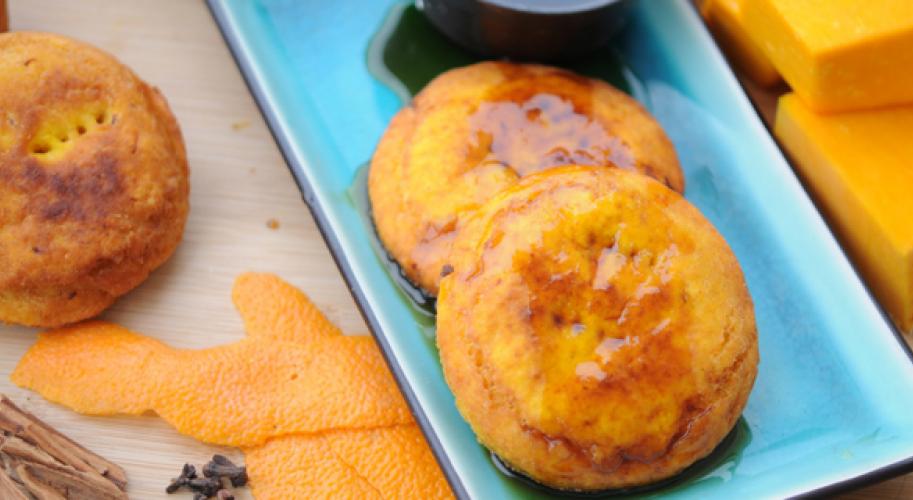 As the weather gets cooler and leaves start to change colors, there is no flavor more associated with the season than sweet, spiced pumpkin. From pumpkin ice cream to pumpkin cake, pumpkin lattes and of course pumpkin pie, this orange squash says cozy in no uncertain terms.

In Chile, our version of pumpkin, which we call zapallo, is a large, mottled, textured squash cut with a saw and sold wrapped in pieces of newspaper at the market. But when we bring it home and boil it, it’s nearly indistinguishable from the northern pumpkin, and it’s this that we use to flavor the classic rainy day snack, sopaipillas.

It might sound like a cliché, but every single time it rains in Santiago, which happens from April through September (our fall and winter) my Facebook and Twitter feeds fill with status after status, “sopaipillas pasadas!” The sopaipilla, which is common to many Latin American cuisines, is a fried disk of dough. In Chile, if it’s homemade, it has squash in it. And if it’s raining out, that sopaipilla goes from frying pan to plate, and is pasada, or basted (or sometimes covered) with a sweet sauce made with chancaca (raw, unrefined sugar) spiced with orange rind, cloves, and cinnamon.

On rainy days, you’ll find sopaipillas pasadas offered up at lunchtime, as an after school snacks as kids come home from school to do their homework, as once (a teatime snack), or as dessert after a light dinner.

The full sopiapilla pasada experience can be a bit sweet (it's all in the sauce) for those who aren’t accustomed to it, which Is why I serve mine lightly drizzled with the syrup and with an extra serving of the sauce on the side. Some pour it over, some dip. Just like with breakfast pancakes in the U.S., everyone’s got their own system.

Leftovers (if you have any) heat up well in a standard toaster and can be served with syrup. The dough is not particularly sweet and these can also be eaten (as a non-dessert) with fresh salsa or the topping of your choice.