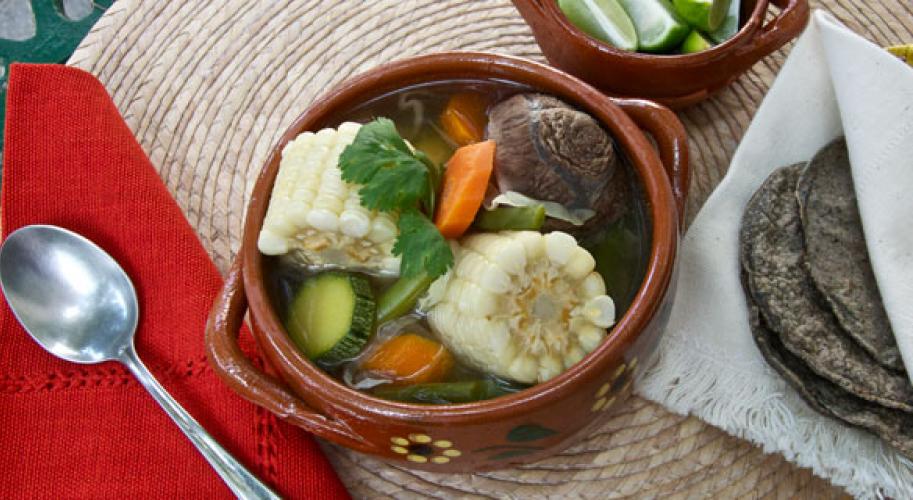 Puchero, or Mole de Olla, is a popular Mexican dish. A salty broth studded with vegetables, chunks of tender beef, and bone marrow, it's a satisfying yet light meal, perfect for those Fall days.

The original Puchero was brought to Mexico by the Spanish. Once it hit Mexican soil, though, creative native cooks put their stamp on the dish. Puchero varies from region to region and every home cook has his or her own style of making it. In the north of the country, where there are cattle ranches aplenty, Puchero is made with beef; as you get farther south, the recipes include beef and pork, and even chicken, as it does in the Yucatán.

In central Mexico, Puchero is an event. It is served as a three course meal starting with the broth. The clear broth is served with chopped raw onion and cilantro, as well as avocado and a sprinkle of lime juice. The vegetables come next on a platter, followed by the meat.

In my hometown of Monterrey, Puchero is always made with beef, but the vegetables are the cook’s choice. My paternal grandmother used to say that Puchero wasn’t Puchero if it did not have white turnip. Many cooks add mint as it simmers to give it a special taste. I like to add chayote to my Puchero, along with the traditional carrots, potatoes, zucchini, onion, tomato, corn, green beans, and cabbage.

Aside from the beef and vegetables, the one ingredient that absolutely has to be in a Puchero is beef bone marrow. Marrow bones impart a ton of flavor to the broth and the marrow is a delicious treat for the few lucky ones who happen to get it in their bowls!

Serve your Puchero with warm corn tortillas and lots of lime wedges on the side. It's the perfect cool weather dish.