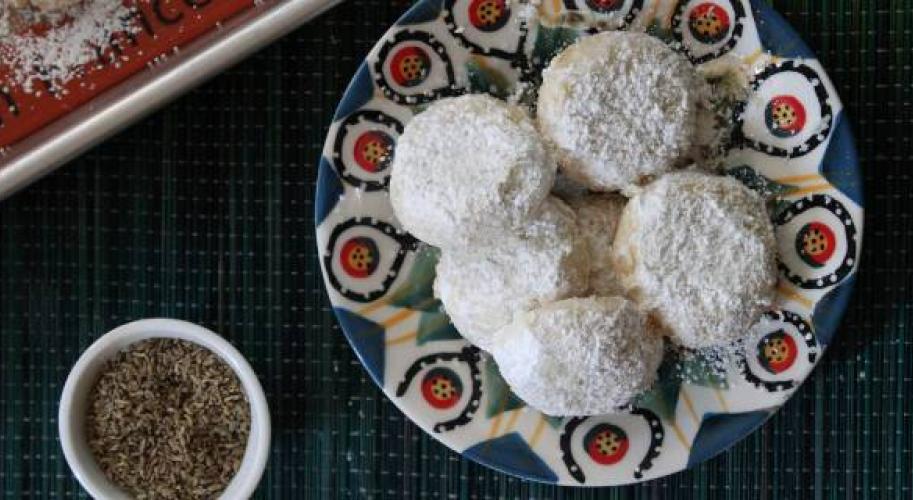 Nostalgia in the form of homemade cookies may be an occasional treat most of the year, but it’s a way of life come December. And these cookies, mantecados, always take me back to my childhood.  Originally from Spain, they are now a Christmas favorite throughout Latin America.  Similar to polvorones, or wedding cookies, they can be made with finely ground almonds or pecans, infused with just a few drops of vanilla, and then served up plain or dusted with a fine sprinkling of powdered sugar. In this version, mantecados de ánis, the cookies are speckled with crushed anise seeds and brightened with lemon.

The key to mantecados is achieving the right texture - deliciously sandy and rich. For centuries, this was done with manteca, or lard, until it fell out of favor. Considered retro at best and deadly at worst, butter, margarine, oil and, even vegetable shortening were seen as healthier alternatives. But recently, lard has made a comeback, thanks to professional bakers who have praised the incomparable flakiness it brings to pie crusts and food writers have reminded us lard has less saturated fat than butter.

It is worth noting that not all pig fat is rendered the same.  The heavily processed tubs of lard languishing on supermarket shelves are packed with preservatives, promising to conserve them a disturbingly long time. These mantecados are made with equal parts butter and leaf lard (the highest quality lard, recommended for baking), which produces the best texture and cleanest flavor. Though high-quality lard can be purchased online (check it out here), it’s worth stopping by your local butcher shop where they often produce their own or can offer advice on the best way to render it at home. It may seem like extra effort, but this time only comes once a year after all.