In his introduction, José Pizarro admits that following up his IACP Julia Child Award Nomination with his first cookbook, Seasonal Spanish Food, was a daunting task. Spain, he explains, is like “eleven different countries in one” and he wasn’t sure what he wanted his focus to be. Accordiung to Pizarro, the diversity of Spanish cuisine and influences cannot be overstated.

For his latest cookbook, a few glasses of txacoli washed the doubts away and helped him decide on the best course of action. Spanish Flavors: Stunning Dishes Inspired by the Regional Ingredients of Spain gives readers a macro-guide of the country’s rich cuisine by identifying the most commonly used ingredients cultivated in each region. The result is a detailed breakdown of the great complexity of flavor and equally disarming simplicity of one of the world’s culinary meccas.

The tour offered in Spanish Flavors makes five regional stops: The North, The East, The Center, The South, and The Islands. Each chapter begins with a brief geographical and meteorological description of the region which serves as an illuminating segue into each of the areas special ingredients. Many recipes, which mostly serve four to six people, start with a quick anecdote that deeply personalizes every dish.

Pizarro's preparation descriptions are wonderfully precise, from the way each ingredient should be handled, to the tools you should use, to the angles a piece of meat should be cut at. Such detail eliminates the guesswork and helps home cooks move from one recipe to another with the expertise of a chef. Pizarro has every course regionally covered, and also provides few ‘basic recipes’ which is an excellent index for easy reference.

Some of the dishes that caught my eye are the Artichoke, Asparagus and Fennel Salad with Crab, the Broiled Cod with Fava bean and Mint Puree and Pancetta as well as the Deep Friend Eggplant with Fritters and Honey. He turns classic dishes into something new like the Crema Catalana Ice Cream. He adds a dash of cilantro to update an old favorite, Salpicon de Mariscos.

Some surprises were the Wild Mushroom, Watercress and Blue Cheese Tart and the Almond Bizcoho with Caramel Oranges. There are also simple country-style offerings like a the Poor Man’s Potatoes made with onions peppers garlic and thyme and Roasted Red Pepper and Anchovy Salad on Roasted Garlic Toasts.

Deftly moving between traditional recipes and his own progressive approach to classic flavors, Pizarro places the reader in Spain’s exciting delectable present. Accompanied by the spectacular photography of Kate Whitaker, who captures the lush details and organic simplicities of Spain’s diverse landscapes, you feel beyond versed in Spain’s essence. Simply put, the cookbook will make you want to get into the kitchen and play.

Here, Pizarro offers a look inside his cookbook to TLK. 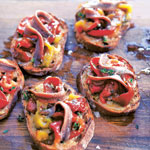 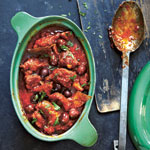